Using urethane foam to give 3 dimensional appearance to embroidery. Foam is placed on the material and then embroidered upon. A high stitch density is used to cut the foam for easy removal.

Decoration or trimming cut from one piece of fabric and stitched to another, usually with a satin stitch around the edge. Adds dimension and/or texture to a design.also Can be used for economical or decorative purposes. Appliqu are frequently used to reduce overall embroidery stitch counts, execute reproductions of which embroidery is incapable such as continuous-tone printing and decorate substrates difficult to embroider directly.

A piece of goods used in the back of a design, where the front will be cut away to reveal the fabric in back.
4.Backing

Material used underneath the item to be embroidered to provide stability and support for the needle penetration. Best performance given when hooped with the item, but also can be placed between the item to be embroidered and the needle plate on flat bed machines. Available in many styles and weights most commonly referred to as cutaway or tearaway

Three stitches placed back and forth between two points. Often used for outlining, because it eliminates the need for repeatedly digitizing a single-ply running stitch outline.
6.Birdnesting

Collection of thread between goods and needle plate, resembling a bird’s nest. Formation of a birdnest prevents free movement of goods and may be caused by inadequate tensioning of the top thread, top thread not through take-up lever, top thread not following thread path correctly or flagging goods.

A yarn with loops producing a rough, nubby appearance on woven or knitted fabrics.
8.Boulogne

A chain stitch used to apply a round cord to a garment. The stitch angle can be adjusted to create a slight twist in the cord.
9.Bourdon

A stitch similar to a zig-zag stitch except that the alternating stitches are parallel to each other to form a Z. Commonly used to stitch appliqu to garments.

A flat, round or oval braided material stitched on a garment to form a decorative design. Soutache is one braid commonly available.
11.Chain Stitch

Stitch that looks like a chain link, formed with one thread fed from the bottom side of the fabric. Done on a manual or computerized machine with a hook that functions like a needle.

Chain stitch ; Stitch in which loops are connected in a chain fashion. Chainstitch embroidery is normally done with a single thread using a machine with a hook in place of a needle to pull the thread through the fabric. See Chenille. Chenille and chainstitch are done on the same machine.

An embroidered motif like an emblem, an insignia or a Coat of Arms. See Emblem.

A type of stitch in which short stitches project at right angles from a main line of stitching formed similarly to coiling. Also known as ray stitching.

A type of stitch. An apparatus to make reinforced edges on scallops, etc., for a strong cutting edge.

Embroidery usually on cut panels or patches, that is framed in hoops exclusively on the top of the embroidery machine hook assembly.
16.Flocking

The decoration of a fabric with a design or lettering using an adhesive and powder through a stencil. Also known as suedene or imitation suede. 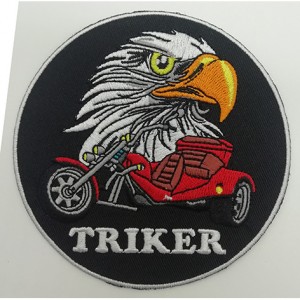 Commonly referred to as a lock-down or tack-down stitch, a lock stitch is formed by three or four consecutive stitches of at least a 1mm movement. It should be used at the end of all columns, fills and any element where jump stitches will follow, such as color changes, machine or manual triming or the end of a designs. May be stitched in a triangle or in a straight line. Lock stitch is also the name of the type of stitch formed by the hook and needle of home sewing machines, as well as computerized embroidery machi